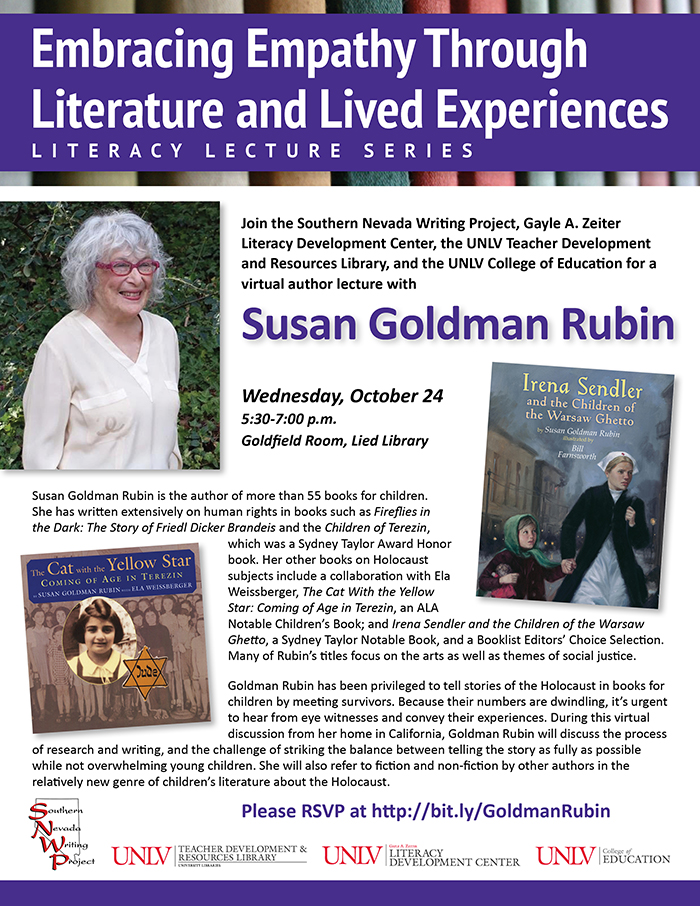 Susan Goldman Rubin is the author of more than 55 books for children. She has written extensively on human rights in books such as Fireflies in the Dark: The Story of Friedl Dicker Brandeis and the Children of Terezin, which was a Sydney Taylor Award Honor
book. Her other books on Holocaust subjects include a collaboration with Ela Weissberger, The Cat With the Yellow Star: Coming of Age in Terezin, an ALA Notable Children’s Book; and Irena Sendler and the Children of the Warsaw Ghetto, a Sydney Taylor Notable Book, and a Booklist Editors’ Choice Selection. Many of Rubin’s titles focus on the arts as well as themes of social justice.

Goldman Rubin has been privileged to tell stories of the Holocaust in books for children by meeting survivors. Because their numbers are dwindling, it’s urgent to hear from eye witnesses and convey their experiences. During this virtual discussion from her home in California, Goldman Rubin will discuss the process of research and writing, and the challenge of striking the balance between telling the story as fully as possible while not overwhelming young children. She will also refer to fiction and non-fiction by other authors in the
relatively new genre of children’s literature about the Holocaust.